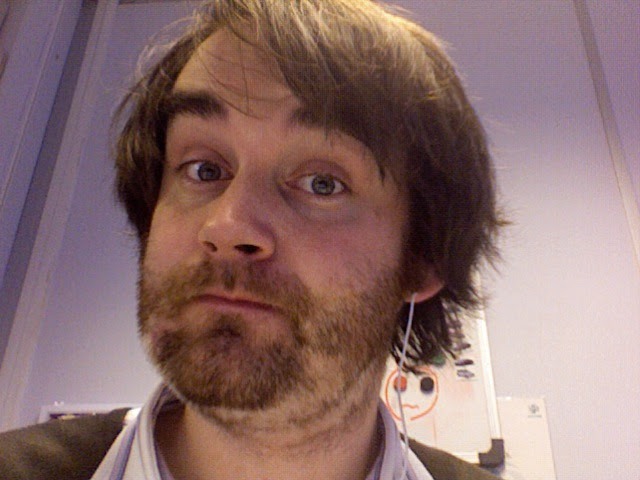 Patches in my beard, that turned white. Then the hairdresser told me I had alopecia.

Edit from 2020 me: This is an interesting one to revisit. The alopecia was almost certainly triggered by stress. A lot of stuff happened in 2008, including the death of my Dad, stuff with work and lots of other stuff. I never felt, or at least recognised, the stress ... but my body certainly let me know. If you've read some of my other personal posts ... well it's fairly clear my immune system hates me. I like the post though.

When Photo Booth snapped that shot I thought I was just starting to go grey. I actually quite liked the look of the white patches on my beard. Distinguished. Or extinguished. One of them two.

I didn’t think too much about it until I went to get my hair cut several months later. (As you can probably tell from that picture, it’s not an event that has been too regular in my life – at least not since I was about 17.) It was then the nice hairdresser girl uttered the words “oooh I think you’ve got a bit of alopecia going on here”.

Katie – the hairdresser – was brilliant. As luck would have it she had actually suffered from it herself in the past and was knowledgable enough to talk me through a few things. Plus she gave me a very nice haircut to make the best of it. I left the shop with the advice of going to see the doctor.

The doctor confirmed the diagnosis of alopecia areata with a shrug and a prescription for some steroid cream. (A prescription, if I’m being honest, that is still stuck to our fridge.)

Alopecia areata – as you might be able to guess from the name – is actually hair loss in patches, usually on the scalp and face. So mine is a fairly classic case, with the glorious white hair and everything.

My hair is thinning naturally – I’m cool with that, tis the way of the male. I’m also cool with going grey. But I always thought it would be a nice steady decline, that could be easily managed with judicious use of the clippers. I wasn’t really prepared for clumps to go missing on random places on my head.

So for about 18 months I’ve kept my hair long, something that I’m fortunately more than used to. I’ve been able to cover up the patches pretty well without worrying too much.

However the whole thing was starting to niggle at me.

I’ve always had longer hair, and always preferred it that way (so has my wife for that matter). As I’ve got older it’s had it’s drawbacks, and the alopecia has kind of exacerbated them. I’ve been leaving a trail of long hairs in my wake. Plus it’s been bloody hot recently. It was constantly getting in my eyes. And to be honest it was starting to look silly.

So a couple of days ago I made the decision to just embrace my weird patchy, baldy, white hair. Welcome the badger look!